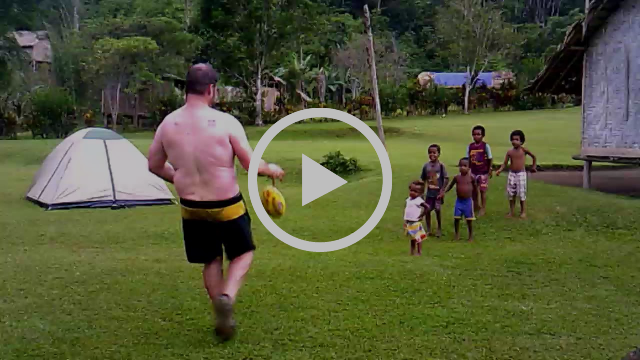 If you’ve not watched Brene Brown’s “The Call to Courage” amidst a recent Netflix binge, then I recommend giving it an hour of your time.

Brown is under my skin in a way that isn’t comfortable.  She makes me think about who I purport to be and how I live that every day … and also when I don’t live it.

You see, we all get tired at this time of year – and I’m at my least likely to be my best version of myself when I’m tired.  When I’m weary, I’m critical of those around me and critical of myself even more.

I’m actually a truly horrible person to myself when I’m tired.  Sometimes, I can also be horrible to others.

That’s why posting the very brief video here both matters and has taken far too long – more than 12 months actually.  I’d just completed our sixth day on the Kokoda Track and this was a particularly tough day

I remember walking the final part of the day in glaring sunshine, out from the protective shade of the jungle canopy.  It hurt.  I was so hot, so exhausted.

But, on the insistence of Rowdy McLean, we’d all brought the gift of a footy along so that each village could have a few kids with smiles on their faces as a thanks for their hospitality.  This day was my turn.

I’ve never liked watching this clip because it’s so revealing of my physical flaws.  I’m pasty pale, overweight and filthy.  I feel disappointed when I look at the state I’m in.

But Brown illustrates that my self-criticism is pointless when she quotes Teddy Roosevelt, “It is not the critic who counts; not the man who points out how the strong man stumbles, or where the doer of deeds could have done them better. The credit belongs to the man who is actually in the arena, whose face is marred by dust and sweat and blood; who strives valiantly; who errs, who comes short again and again; who spends himself in a worthy cause; who at the best knows in the end the triumph of high achievement, and who at the worst, if he fails, at least fails while daring greatly, so that his place shall never be with those cold and timid souls who neither know victory nor defeat.”

Paradoxically, I’ve been both the man in the arena and the critic when it comes to this clip.  And the critic in me needs to finally be silenced – so I share this clip with you in the hope you’ll see the daring in it beneath the veneer of my appearance.  My inner critic has no right to abuse the man in that clip who has worked so hard all day and is still finding a way to kick the footy (badly – onto a roof!) with the enthusiastic and grateful children in this clip.

So, why am I writing this message to Teachers today?

It’s because I know you’re tired and perhaps even a bit dishevelled.  I know you’re wishing for the end of the journey.  I know it’s harder now than it’s been all year to be at your best.  It’s easier now to turn on others and on yourself.

I know your own inner critic is getting louder and insisting that you ignore the triumph belonging to you and your colleagues who have stayed in the arena.

I want you to resist the urge to take your foot off now and to fill the remaining days of the school year with busy work for your students.  Resist the temptation to abandon your principles about working with young people and being a worthy team member just because you’re worn out.

Be in the arena.  Fight for student achievement and growth, despite the fatigue and despite how you think it looks to others.  They’re not in the arena and as Brown puts it “If you are not in the arena getting your ass kicked too, I am not interested in, or open to, your feedback about my work.”

Critics and quitters have no place in schools, or in your head, during Term 4.

As the diggers on the Kokoda Track did in 1942, soldier on for no other reason than it’s a noble and worthy cause. Good luck!