Critical thinking … it ain’t dead yet! 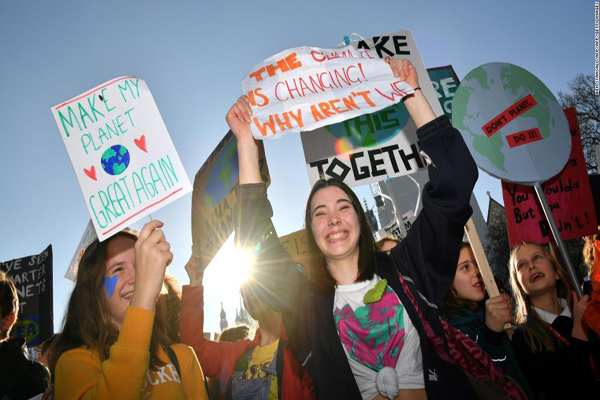 This week, thousands of students around Australia will strike against government inactivity in regard to climate change.  As a lifelong educator, it’s a wonderful thing to see.

Despite being one of the vast majority of Australians who would support our governments taking more meaningful action about climactic demise, this isn’t the part that excites me about the strike.  You need to scratch beneath the surface of the topic to see what has triggered it to get truly proud and excited by these determined kids.

What so encourages me is that this strike proves beyond doubt that we have a mobilised student population who are demonstrating their ability to think critically.

Despite the discouragement of intellectual prowess that happens via NAPLAN and exam based assessments, it would appear that the curiosity of our students and their willingness to interrogate public debate vociferously isn’t quite dead yet.

Rather than lament these students as being lazy or groomed, we should listen to multi-national employment and education drivers like Microsoft who recently released their research into the skills that young people will need to be relevant in tomorrow’s workforce.

Among them are analytical abilities and continuous learning capabilities.  Both are particularly relevant to the climate change student strike.

Analytical abilities are demonstrated when young people look deeply into an issue and choose not just to mindlessly accept the Google results that are spewed forth when we hit the search button.

As the Institute For The Future at the University of Phoenix also pointed to when it labeled Cognitive Load Management as a critical work skill beyond 2020, it isn’t enough for young people to merely accept information.  You’ve got to be able to tell what’s useful and what’s nonsense.

To learn how to manage the overload of millions of search engine responses, you need to be able to practice sifting through facts from fiction.  So why not practice that thinking on issues that matter instead of debating banal issues like the importance of school uniforms or whether teachers should be called by their first names?

That second concept of continuous learning capabilities is all about becoming ok with being wrong.  When you’re dealing with complex problems and devising potential solutions, you’ll undoubtedly find yourself learning by trial and error.

We’ve spent years gradually removing trial and error from the list of ways that kids learn, apparently due to its discomfort.  But let’s be honest, most of us learned not to touch the stove by touching it and not via the dozens of parental warnings that the stove was hot.

So, if the kids striking on Friday are wrong about climate change, what’s lost?  The world has survived student protests in the past as students critically examined the merits of wars, racial segregation, women’s rights and communism.  In many cases, history has proven them to be unequivocally right.

Conservative commentators who are perpetually outraged by these uppity students and their lefty teachers indoctrinating their students into socialism might well pause here for some critical thinking themselves.

Are they really against kids learning to think critically … or could they just quietly be rather worried that the kids are right again?