When and how did it start? 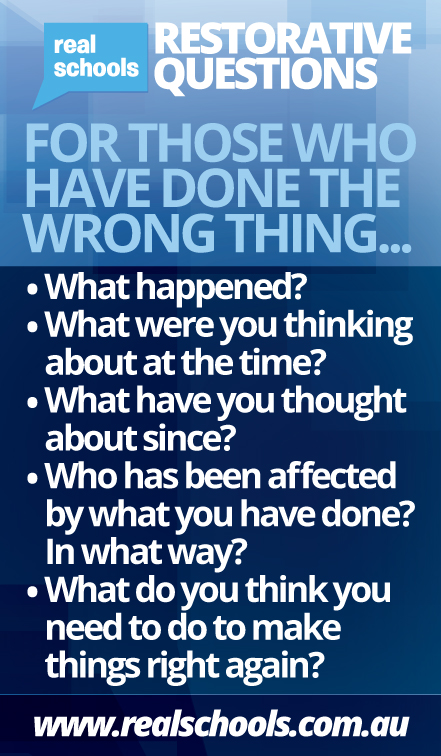 Jayden is one of my favourite success stories from a career of practicing restoratively – but that success didn’t come easily or instantly.

Battling Tourette’s Syndrome and a healthy appettite for general playing up, Jayden always ensured that I, as AP in charge of Behaviour & Wellbeing, had something to chat with him about.

Mostly those discussions happened after I’d successfully extracted him from a roof, a bathroom or from behind some playground equipment.  You see, if Jayden saw me coming … he’d bolt.

It was a real drain on my energy, time and effectiveness.

And so I sat with Jayden over a free lunch one day and just chatted.  He’d done nothing wrong and I made that clear.  I just bought him a sausage roll and a Big M out of the blue and it quite freaked him out!  As he ate, I handed him one of those cards with the Restorative Practices questions on them.

I said “Mate, can we just agree now that I’ll never ask you anything when something goes wrong that isn’t on this card?”

His response was a mumbled, “Fine, I’ll answer your stupid fucking feelings questions.”

It was my first little win – a minor, sweary, begrudging win.  But that win was a circuit breaker.  It ended a negative behavioural spiral for Jayden and gave me something instead to thank and congratulate him for.

We had a year peppered with small wins … and also the occasional loss.  That’s the way it is with our students for whom behaviour is a major challenge.  It’s like drug addiction, a chronic relapse condition.

As you conclude the school year, you might have a success story to reflect upon too.  I hope you do.

But I bet it began with something small and even begrudging.  There’s a lesson in that.

When your Jayden turns up early in 2020 (because you know he will), how exactly will you manufacture that tiny, reluctant win as a matter of urgency?